From Washington to Wall street, there was no shortage of news for investors to digest this week. Data largely supported the view that the U.S. economy is bouncing back from its winter weakness. Markets have one eye turned on policy shifts in Washington too, where the GOP took baby steps towards repealing and replacing Obamacare (ACA). The revised American Health Care Act (AHCA) passed the House by a very narrow margin, but faces a bigger challenge in the Senate.

Investors heaved a sigh of relief on Friday as the job market bounced back in April, bearing out the Fed’s confidence in the economy expressed in Wednesday’s rate announcement. Payrolls advanced 211k jobs in April and the unemployment rate fell to 4.4% – the lowest level since 2007. Broader measures of labor market slack also declined, with the broadest U6 measure (including discouraged workers and involuntary part-timers) falling to 8.6%, just 0.2 percentage points off its pre-recession level (Chart 1). Average hourly earnings rose 0.3%, as expected in April. That left wages up 2.5% over a year ago, not yet flashing red, but is still sufficient to provide real gains in purchasing power (Chart 2). This should flow through to consumer spending in the months ahead, providing the impetus for stronger economic growth.

As expected, the Fed kept interest rates unchanged on Wednesday and issued a largely status quo statement. It pointed to continued improvement in the labor market, while seeing through disappointing economic growth in the first quarter. The weakness in inflation in March was noted, but one-month’s result is unlikely to sway the Fed.

As Yellen has continually emphasized, the Fed’s path is data dependent. So, members will be watching the data closely over the next few weeks as indicators for the second quarter are released. If the numbers confirm that a second quarter rebound is underway, and that the slowdown in inflation has not become more entrenched, we would expect the Fed to take rates higher in June.

So far this year, measures of sentiment have been more ebullient than the “hard” economic data. Not surprisingly, the ISM Manufacturing index did lose of bit of its postelection optimism in April. We have raised concerns that markets might have been a bit overconfident that Washington could easily implement highly stimulative fiscal policy. While this week, the House finally passed a bill to repeal and replace the ACA, this is only the first step in an ongoing process. Passage in the Senate where the Republican majority is even slimmer, will prove much more difficult.

Passing healthcare reform into law is arguably a necessary pre-condition to making further changes to the tax code. This is because the savings achieved leave room to cut taxes without expanding the deficit. The Congressional Budget Office has not yet scored the new bill, but the previous bill reduced the deficit by over $330 billion over the next decade. This is only about one-tenth of what is necessary to pay for Trump’s proposed tax cuts, but it might allow for some reduction in the corporate tax rate. In any case, there is a long road ahead on forging consensus on both the AHCA and eventually tax reform, leaving the potential for further sentiment disappointments in the months ahead. 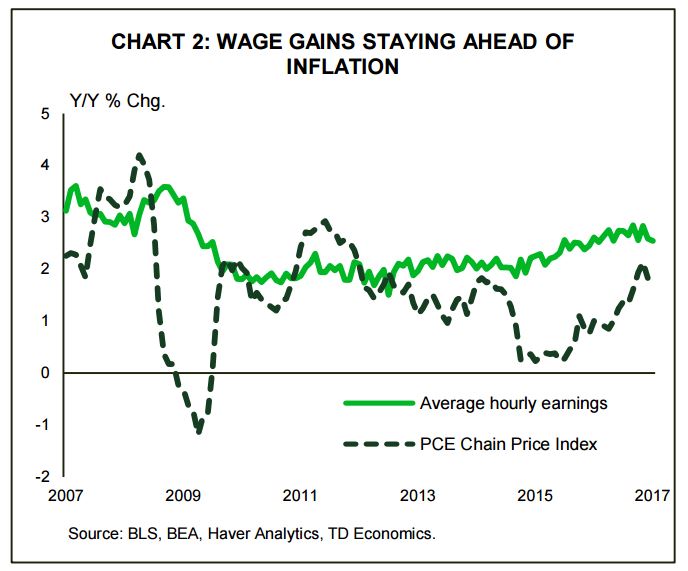 This report is provided by TD Economics. It is for informational and educational purposes only as of the date of writing, and may not be appropriate for other purposes. The views and opinions expressed may change at any time based on market or other conditions and may not come to pass. This material is not intended to be relied upon as investment advice or recommendations, does not constitute a solicitation to buy or sell securities and should not be considered specific legal, investment or tax advice. The report does not provide material information about the business and affairs of TD Bank Group and the members of TD Economics are not spokespersons for TD Bank Group with respect to its business and affairs. The information contained in this report has been drawn from sources believed to be reliable, but is not guaranteed to be accurate or complete. This report contains economic analysis and views, including about future economic and financial markets performance. These are based on certain assumptions and other factors, and are subject to inherent risks and uncertainties. The actual outcome may be materially different. The Toronto-Dominion Bank and its affiliates and related entities that comprise the TD Bank Group are not liable for any errors or omissions in the information, analysis or views contained in this report, or for any loss or damage suffered.
No independent analysis has been performed and the material should not be construed as investment advice. Investment decisions should not be based on this material since the information contained here is a singular update, and prudent investment decisions require the analysis of a much broader collection of facts and context. All information is believed to be from reliable sources; however, we make no representation as to its completeness or accuracy. The opinions expressed are as of the date published and may change without notice. Any forward-looking statements are based on assumptions, may not materialize, and are subject to revision. All economic and performance information is historical and not indicative of future results. The market indices discussed are not actively managed. Investors cannot directly invest in unmanaged indices. Please consult your financial advisor for more information. Additional risks are associated with international investing, such as currency fluctuations, political and economic instability, and differences in accounting standards.